KAWAIIPUNK MASCOTS HAVE DEBUTED ON THE JAPANESE MARKET 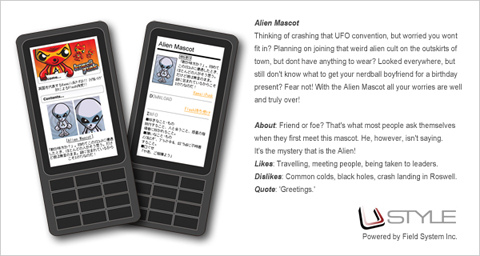 Mascots of ‘KawaiiPunk’, an online emporium for kawaii mascots run by Michael Togneri, have debuted on Japanese mobile phones. The contents are delivered from ‘USTYLE’, available on 180+ mobile phone models for three major Japanese mobile operators (DoCoMo, KDDI, SoftBank), and will be added periodically.

USTYLE is one of successful mobile content websites run by Field System Inc., Japanese leading mobile content provider. Since its launch in 2005, USTYLE has been specialized in delivering quality mobile contents which are developed by talented artists from throughout the world.

Michael Togneri is a notable Scottish artist who was a winner of first place in the Zazzle UK Launch Design Contest (History Category) in 2008, and is currently running his website ‘KawaiiPunk.com’. At there, 50+ kawaii mascots can now be found on t-shirts, bags, cards, stationery, mugs, mousepads, badges, and stickers – as well as being found on their very own blog.

“Kawaii” is a Japanese word in origin that refers to as “cute”. But nowadays, due to the popularity of Japanese subculture (e.g. animation, comics, games) in the world, it has become part of the English language like other Japanese subculture’s words such as anime, manga, otaku. And spreading such Japanese subculture has had a strong influence on artists outside of Japan as well. Michael Togneri is one of such artists who has been drawn to and influenced by Japanese culture and media.

Michael Togneri is represented in licensing by DENKI-MIRAI.